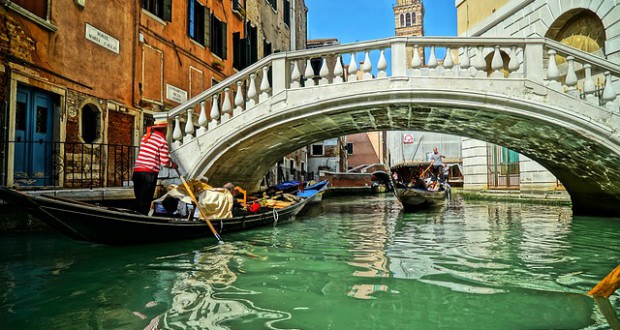 A city magically rising from the waters, and suspended in time, Venice has always exerted a powerful influence on the imagination of many a traveller. Its charm and appeal are undeniable, whether you are more drawn to the Rococo costumes and masks of the carnival, the surreal aura of the city enveloped by wintery mists, or the centuries of merchant and explorer history, which have contributed to the diverse culture and traditions of the Serenissima. An ancient, exciting city, it presents undying landmarks of European culture, such as Piazza San Marco with its gloriously decorated Basilica and iconic Campanile, the Rialto Bridge, the Canal Grande. But Venice does not simply limit herself to being the ideal tourist playground, the city is still a thriving city and very much alive, belonging to the Venetians who love it and live it everyday, and to the cats who snooze in the shop windows. 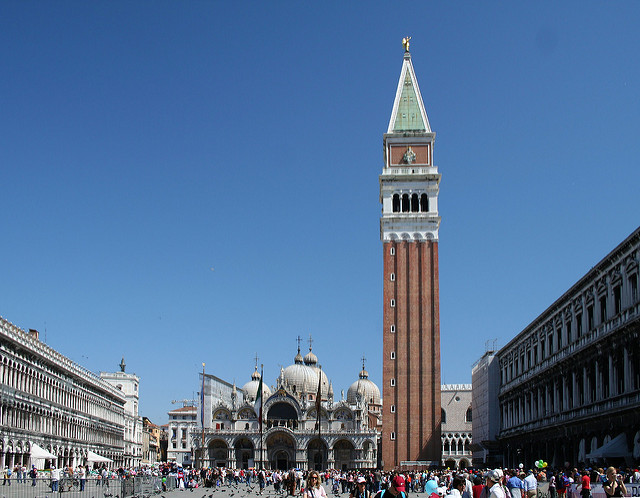 To begin, let’s talk about the classics, the unmissables: Piazza San Marco and the Palazzo Ducale. Revel in the simple vastness of the square, admiring the exquisitely decorated façade of the Basilica, the red brick campanile, from which you can enjoy an incredible view of the city and the winged lions, symbol of Saint Mark the Evangelist, patron saint of Venice. Nearby lies the Doge’s Palace, former seat of authority as well as private residence of the supreme leader of Venice. The exterior is decorated in the gothic style, its pattern remarkably reminiscent of the fine lace, which Venice has been famous for throughout the centuries. 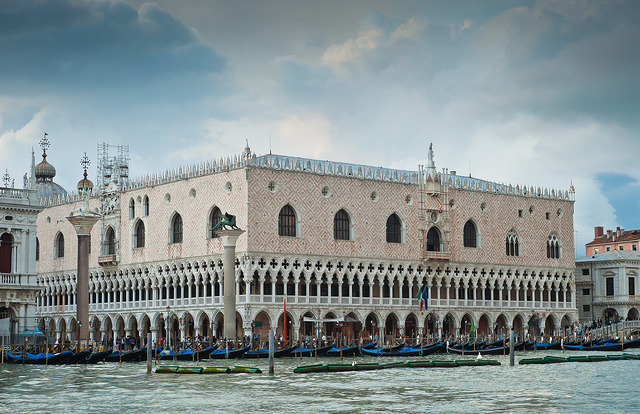 The palace faces the lagoon, and if you walk along it for a couple of minutes, you can catch a vaporetto that takes you across to the the small island of San Giorgio Maggiore. Lying in the middle of the St Mark’s Pool and just opposite San Marco, it gives you a splendid viewpoint of the city’s most famous landmark. In the island there is also a beautiful church to visit, which has a campanile you can climb to enjoy a less crowded view of Venice, and take pictures from a different perspective. 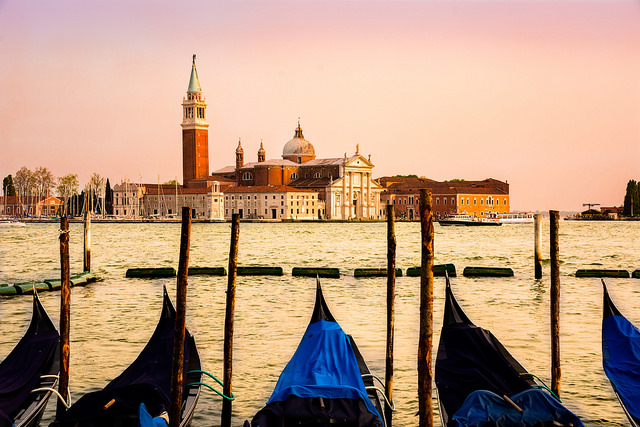 Returning to the main island, if you cross San Marco heading towards the north side of the city, you reach Rialto, the beating heart of Venice. Rialto Bridge in fact not only is the most admired bridge of the city, but was also its first. So you can imagine how, in a city built on water, it quickly developed into the vital hub of daily life and commerce it still is today. Rialto Market lies just in the vicinity and is a fantastic experience; definitely the place to be if you like fish, or generally appreciate seeing wonderful displays of food and ordinary life in the making. 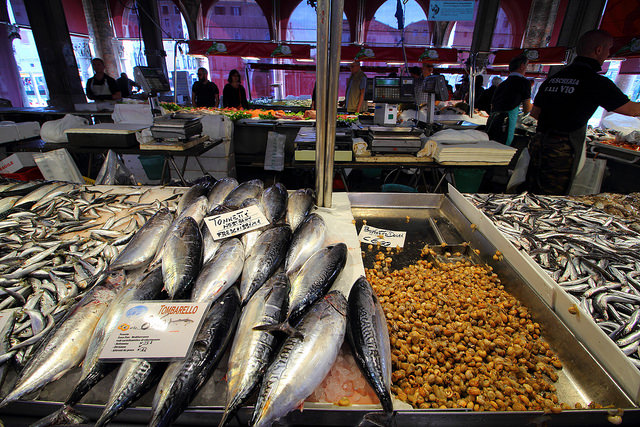 On your way there, delve into the intricate criss-cross of narrow “calli” to find the Scala Contarini del Bovolo: a gothic spiral staircase dominating an otherwise seemingly anonymous courtyard, providing another excellent viewpoint to admire the city’s expanse of roofs. A Venetian Pisa Tower of sorts. 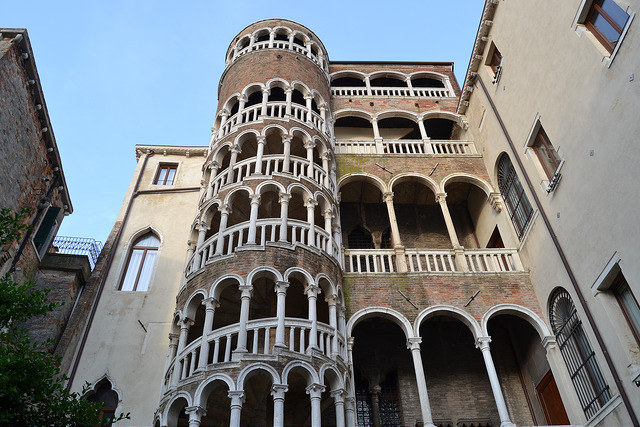 Further along the canal you enter the Sestriere of Venice called Cannaregio. Here lies the Venetian Ghetto, the first settlement of this kind in Europe, which commemorated its 500th anniversary in 2016. This area is also particularly renowned for its “bacari“, Venetian taverns where you can feast on “cicchetti” (Venetian version of tapas, normally featuring shellfish or products of the sea) in the company of an “ombra” [shadow] of wine. When in Venice at “aperitivo” time, you really should try a spritz. Now a classic Italian aperitif, it was born out of the mixture of local and Austrian traditions, in the times of their invasion of the area. 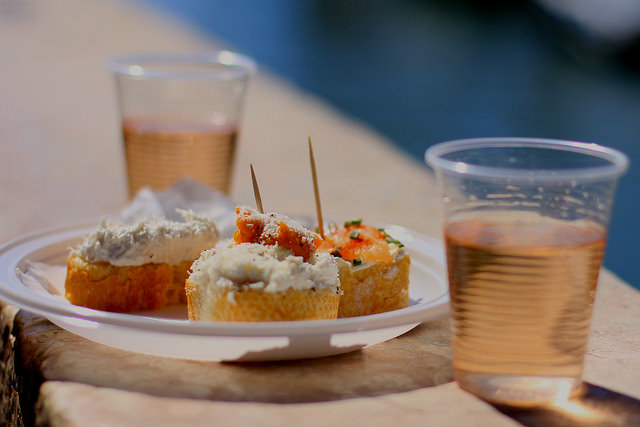 From the Ghetto quarter you can catch a boat to take you to the islands of Murano and Burano, passing by the graveyard-island of San Michele. While Murano is more internationally known for its traditional glass working workshops, Burano is also worth a visit. Known as the island of colours, all the houses are painted in bright shades of green, blue, pink, yellow. Traditionally, this is because it made it easier for returning fishermen to find their homes in the thick fog that covers the lagoon at dawn. It is also the centre of refined lace production.

This is only a tiny selection of the innumerable attractions that Venice has to offer. Like an oyster, this city comes from the sea and hoards hundreds of beautiful perls, both in plain sight or hidden, waiting to be discovered. Canals, art collections, palace, parks, churches… But the single most valuable thing you one can do in this magical city, preserved in seasalt through the centuries, is simply to get lost. Lose yourself in the “calli” of Venice and you are guaranteed to return with incredible visions of the city still shining in your eyes – if you ever find the way out, that is!

In fact, before getting lost in Venice alone, you may need to have an overview of the city. That’s why you should take a quality tour, like the ones organized by Walks Inside Venice. You can choose a small group tour or even a private one, enjoying a tailored discovery of the city.

For more information about Walks Inside Venice: 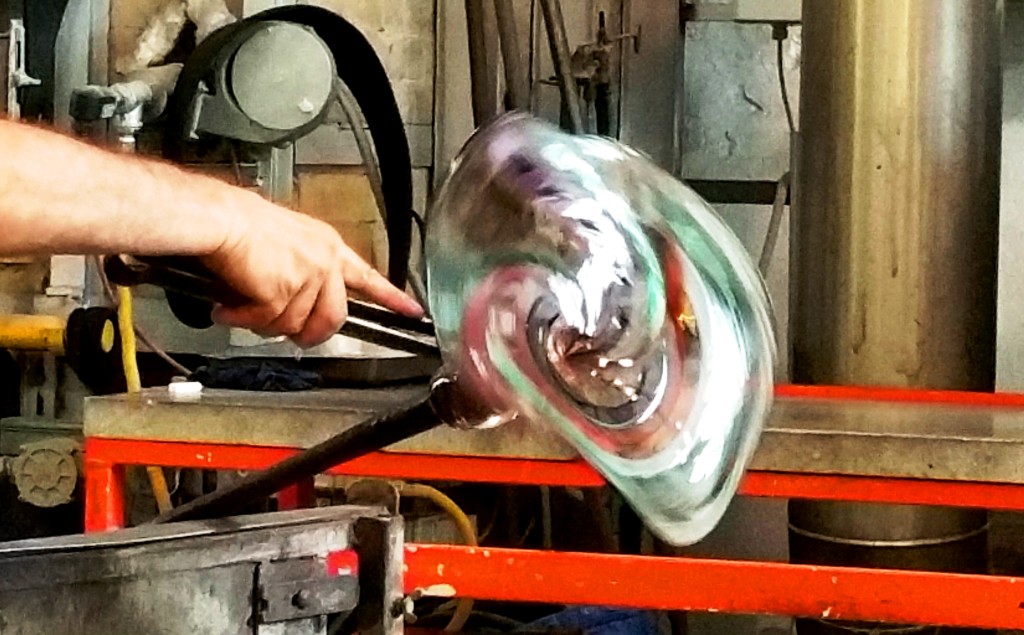 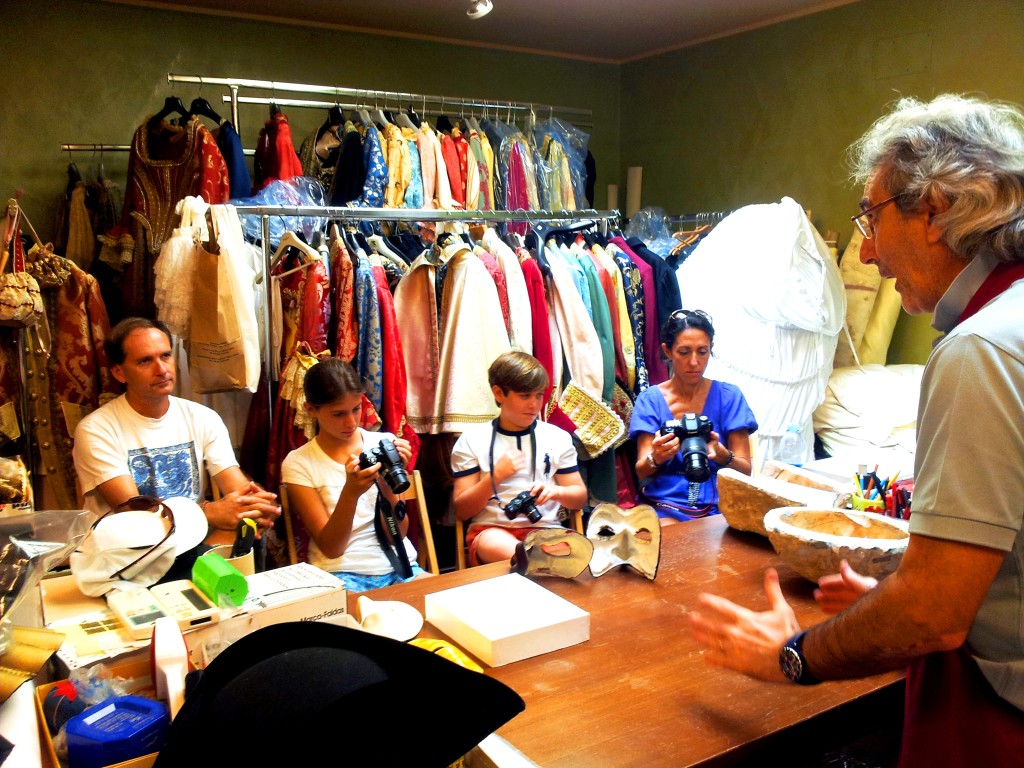 For such a particular city it doesn’t come as much of a surprise that it has its own specific terminology. For instance, there is only one “piazza” and that is San Marco: all the rest are called “campo”. With regards to street names, they will be one of the following:

Calle: small road flanked by walls on either side
Fondamenta: a road flanking a canal
Rio: similar to a fondamenta, but larger
Ruga: similar to a calle, but containing houses and shops

To discover the city with a local guide, you can can take a free walking tour in Venice. You will be able to choose between an “Introduction to Venice” and a deeper disclousure of the city. For more information:

If you are looking for an hotel but you don’t know which one to choose, we suggest you the Booking.com Best Seller Antico Panada.

← Previous Trip to Paris
Next → Why taking a shared or private walking tours to visit Italy?